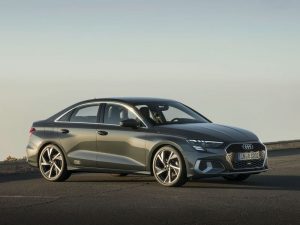 Audi unveiled the new A3 sedan – a bigger, sportier looking vehicle than its previous cohort. The compact sedan has grown on all fronts, which translates into more interior space. Stylish coupe-like looks and new chassis setups make it distinctly sportier than its predecessor.

When it comes to the design, the new A3 looks inspired by the A3 Sportback. It gets a recognizable front with a large single-frame grille and sharply drawn headlights in the top model with Matrix LED technology. And in profile, the characteristic side line on the A3 sedan, unlike the Sportback, extends all the way to the rear bumper. This accentuates the length of the Limousine by 15 cm compared to the Sportback.

The roofline curves backwards from the B-pillar to the striking – optionally available in carbon – rear spoiler, which gives the A3 the coupe-like looks.

The chassis of the new A3 offers a sophisticated balance between comfort and dynamism, but now puts more emphasis on sportiness compared to its predecessor. In addition to the standard chassis, there is also a choice of a sports suspension or a suspension with adjustable dampers.

The cockpit of the new A3 Sedan is entirely focused on the driver. This begins with the interior design and ends with the display and control elements. The instrument panel with the central MMI touch display is inclined slightly toward the driver. It has a 10.1-inch diagonal and is intuitive to operate. As standard, it includes handwriting detection as well as natural language control that can optionally draw on the capabilities of the cloud.

The 10.25-inch instrument cluster behind the steering wheel is digital even in the basic model. As the Audi virtual cockpit plus, it measures 12.3 inches and offers three different views, including sporty graphics with inclined digits and a particularly dynamic layout. Upon request, a head-up display complements the display concept, whereby it projects important information onto the windshield in the driver’s direct field of vision.

The new Audi A3 will be initially available with a choice of a TFSI petrol engine and a TDI diesel. The 35 TFSI delivers 110 kW/150 hp and is standard paired with a seven-speed S tronic dual-clutch transmission. It also features a 48-volt mild hybrid system. This technology preserves energy when decelerating and delivers up to 50 Nm of extra traction in accelerations from a standstill or from lower speeds. In addition, the mild hybrid system contributes to fuel savings.

The 2.0-litre TDI is also combined with a seven-speed S tronic that is now controlled via shift-by-wire technology. It can deliver 110 kW/150 hp of power.

Two more engines are likely to follow later: a 30 TDI with 85 kW/116 hp and a 30 TFSI three-cylinder petrol engine with 81 kW/110 hp, both equipped with a manual gearbox.

While the car is expected to be launched for sale in Europe later this April 2020, UAE may have to wait a little longer to see it on the road.